The Age of Magical Science Has Begun 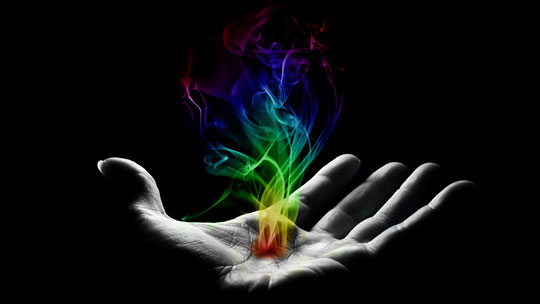 Q by Jake M: By materialization you mean if I want something and do some magic and then “poof” I have that thing in my hands?

A: Yep, Jake. Great question. Like a gymnast learning a triple backflip, we’re talking about an advanced and complex skill that requires a fair bit of foundational and prep work until it can happen – then happen perfectly, every time.

Just like the scientific understanding of anatomy, physiology, nutrition, etc grows with every dedicated athlete and scholar, the same is true for magic.

Materialization has been achieved, documented and caught on camera many times in the past (Sai Baba, students of Nithyananda). As with anything we call legitimate, details need to be precisely observed, documented, understood and scientifically replicated.

The delight (and for some, frustration) of studying any field of science is the process of trial and error, of accuracy and confusion. Are all the variables of Magic known to us?

Author, Druid and civil rights activist Isaac Bonewits examined the factor of “Catapsi” or “anti-psi.” Many organizations which examine psychic and magical phenomena (remember, Magic according to Arthur C Clarke’s definition is science we don’t fully understand yet, just like a cell phone to ancient romans) – organizations like noetic.org – use psi to describe the category of practices using psychic abilities.

Back to the gymnast. If everyone was heckling her, cursing her, doubting her, and offering scorn and disdain, in many cases her chances of a perfect triple backflip would be reduced. If she’s at a true Mastery level, those distracting influences won’t prevent her success.

Do you think if Jesus, Buddha, Moses, Thoth or any other big names throughout history had doubters, their power would lessen if they truly chose to share it?

So, here is the situation we are in. What is the extent of catapsi? How can we build enough psi (magical strength) to overcome it? Do you have to be a true master with 40-60 years of dedication, or other special circumstances in order to materialize a diamond? Or could you be a disciple, receive a transmission, perform a technique in a sacred environment, and achieve it?

Scientifically, how much psi does this take? 1,000,000 midichlorians? 1 trillion “units of focus?” or an effortless observation by a truly enlightened master who is surrounded by and generating sufficient quantities of psi at any moment that a materialization is no more difficult than lifting an arm for most of us?

I hypothesize that enough people working together can achieve this without decades of dedication. Do I know the exact variables, at the moment I type this? Yes. Will that knowledge prove successful when we get 150 people in a room with the right alchemical diagrams, crystals, sacred intent, and psi? The ego that is David hopes so! The soul knowing that is the embodied divine has no doubt.

In the equation of psi and catapsi, we also have the magical variable of “heavy lifters.” Say Jesus wasn’t always as powerful as he was in his adult years. If Jesus was at say, 50% his power levels at age 16 when he was rumored to be studying with yogis in the himalayas, how many other people, at what level of development, would it take to materialize a diamond?

The same goes with the experiments we will do. There are other communities like Damanhur engaged in magical research, who have an immense number of tools, individuals, divine energies, and other supportive factors at their disposal. My first repeated success at aerokinesis was in that city. Could it be that the field of Damanhur contains a latent, stable quantity of psi?

So much to learn, so much to research, so many experiments to perform!

The age of Magical Science has begun 🙂

Keep on reading about magic or simply join us in one of the magic events!

Quick shout out to Bonewits, who according to wikipedia “Enrolled at UC Berkeley in 1966; he graduated from the university in 1970 with a Bachelor of Arts in Magic, becoming the first and only person known to have ever received any kind of academic degree in Magic from an accredited university.”

He also founded the Aquarian Anti-Defamation League, and his book Real Magic was the first serious one I read on the topic. As one of my many spiritual teachers, I am eternally grateful for his presence in our realm.